(Yes, I am going into Proud Mommy mode. So there!

Hui Ning started to half roll over when she was around 3.5 weeks old, i.e. rolling onto her side. Not just any random rolling over. You see, I usually breastfeed her lying down (I find her too heavy to carry, eheheh). She was especially hungry and was going "eeehhh~~ eeeh~~~ eeeeh~~" and almost on the verge of tears. I laid her down on the left side of the bed and was getting myself ready, when she raised her legs and with some effort, rolled over to her right side. And waited for me in that position without bulging.

She did it again and again since then, always rolling over so that she'd be facing me!

We suspect that she talks, albeit in her own language i.e. her own lexicon + grammar (a really simple one, we're guessing). She'd go into sudden bouts of loud babbling with a variety of sounds and even different intonations. (OK I'm probably too hopeful there, but hey, take another look at the post title

While what she's trying to say is anybody's guess, there are two utterances that we're sure about.
If the "Ow-wow" request is not honoured, it's "Eh! Eh eh eh eh eeeeeh eeeeeeeehhh~~~ eeeeehhhhh~" or even "WAAAAAAH!!! WAH WAH WAH" time. Go figure.

Hui Ning's also started to drool and blow bubbles with it. We didn't think much of it, until the babysitter told us that babies aren't supposed to start doing so until around 4 months old. (BTW she also thought that babies only start babbling around 2 months, but Hui Ning's been babbling since, like, 3 weeks.)

Then this happened last night, about 2 days short of her becoming 2 months old... We give her the pacifier when she's absolutely can't stop begging for one (which happens usually only at night). It kept falling out of her mouth though, and she kept using her hands to frantically "mop" all over her face to find it again.

MC told her "Why don't you use your hand to hold it in instead? Like this..." and took her left hand to hold it against the pacifier while it was in her mouth. That seemed to keep her happy for a while, and we thought that was that.

But there was more...

Roughly an hour later, Hui Ning's pacifier fell out again, though not far off from her mouth as she was in my arms. She actually picked grabbed the handle between two fingers — forefinger and thumb — and calmly put it back into her mouth!!

Was it a coincidence? Not really. That was using the left hand. About 5 minutes later it fell out again and this time Hui Ning used her right hand (again, forefinger and thumb) to retrieve and popped it back in.

But as she got more and more sleepy though, she lost her "touch"... when it fell out as she became really drowsy and could only frantically wave her hands all over her face to try to find it again. Awwwwww.... At that point I just picked her up, pat her a little and she's off to Dreamland...
Posted by Unknown at 1:35 PM No comments:

WELL. Due to the current China milk scare, my former detractors are now saying that how lucky that I'm breast-feeding Hui Ning!

BTW, their gripes were that
Posted by Unknown at 4:44 PM No comments:

I've heard of football dads — guys who can't wait to dress their babies in their favorite team colours. And as I suspected, MC is one, too!

So Hui Ning's first introduction to football was when one of the Olympic football matches was showing on TV, and I brought her out to the living room. MC took her over, pointed at the TV and said, "See? Football!" “看，踢足球！”

Her second brush with football, specifically with the EPL, was during the live telecast of Liverpool vs ManU the other night. This time MC took her in hand, pointed at the TV and said "See? Liverpool!" “看，利物浦！” (This time even his football kaki friend who came over to watch the match also cannot tahan...)

Hui Ning looooooves company. People talking to her, or holding her. And she'd protest loudly if she feels lonely...

It'd always amuse people when their first meeting her. Everyone would coo and gurgle and talk to her, all the while when she's smiling ever wider and wider and amuses people even more. Eventually though, everyone — and I really do mean everyone — have problem keeping up the conversation and surrender with variations on "oh dear, who's got all the time to keep talking and talking and talking to you darling? And I've run out of topics to talk to you already!"

I coulda told them that when she was 3 weeks old...

I've a good mind to read to her from the Lord of the Rings. We'll even go into the Appendices if needed. And after that, we've got the Hobbit, the Silmarillion, the Unfinished Tales, even Tolkien's Letters and the Histories of Middle Earth!
Posted by Unknown at 3:07 PM No comments:

Needing the service of a superheroine? Look no further than me, the... er... ah.... hmmm. I need a superheroine moniker. Any suggestions? 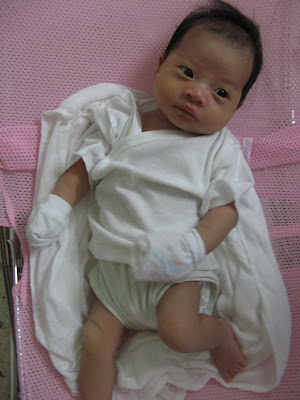 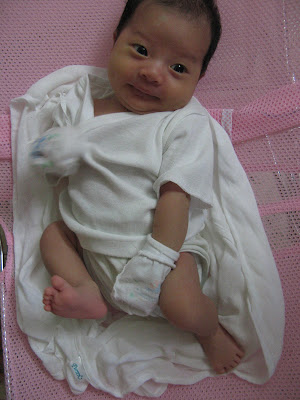 Hush. I just sneaked into the enemy's secret hideout and trying to find out where they're keeping the hostages. 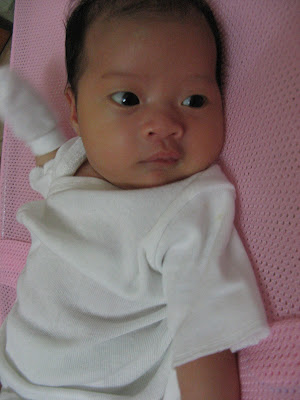 I hear a scream! Hang on, I'm coming! 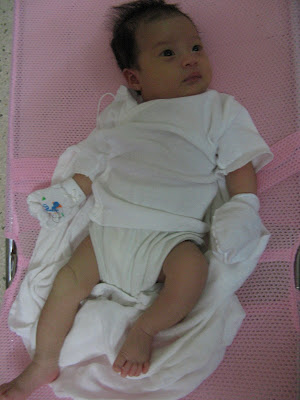 You ain't getting away, you baddie! 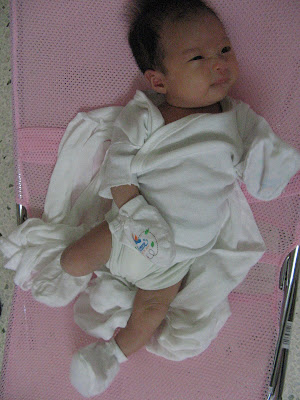 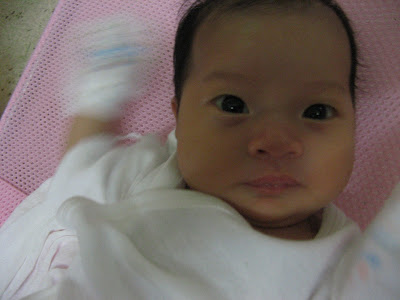 Another day, another baddie in the garbage can. I'm off! 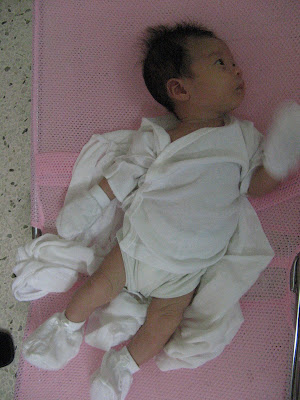 Posted by Unknown at 2:13 PM No comments:

Where to start blogging about your baby? There're so many bits and ends and trivias about Hui Ning...

Posted by Unknown at 5:59 PM No comments: