It looks as though I'll have to stop breastfeeding HN. Even though I still express every morning while I was in KL for a conference last week, my milk supply has dwindled steadily. HN isn't letting me off so easily, though. She still insists on suckles after every bottle, despite me telling her mommy's milk isn't quite enough anymore...
Posted by Unknown at 9:53 PM No comments:

I guess it's bound to happen sooner or later, given the no-holds-barred way HN frolics around... but she still gave us a turn. Friday evening and we'd just came back from SP, and she'd just finished her bath and was playing and rolling around like nobody's business (as usual). When suddenly she started wailing LOUDLY.

I ain't worried yet.

And she doesn't stop wailing after a few minutes.

I took a good look at her and somehow it seemed that her left arm's not quite right. No swellings, no bruises, no nothing, yet she's holding it a bit limply.

I tried to get her to grab a ball, she takes it up slightly, wailed even louder, and drop it away. I gently raised her arm, she shifts her shoulder as if to avoid touching a nerve, and screams.

Oh CRAP. I insisted that we took her to the pediatrician RIGHT AWAY.

Well, the pediatrician quite promptly confirmed that it's a pulled elbow (i.e. "mild dislocation of the elbow which is the result of the lower arm slipping out of its normal position at the elbow joint", OUCH OUCH OUCH OUCH I can't stop wincing as I read and typed that!!) after ruling out accidental swallowing something, tummy upsets, fractures etc. She put things right in a jiffy (as promised by all the articles I looked up later) and prescribed some pain-killers, and assured us that all is well now, but we should avoid touching her left arm for a while (strictly no further massaging!!!) and especially not lead her by the left arm.

Quite understandably, HN was still sniffling as we left the clinic. I said to her "well you'd better not play so roughly from now on." To which she sniffled, whimpered and nodded her head vigorously.

After tucking her in that night, I googled some more, and learnt here that pulled elbow occurs slightly more often in females (check), and in the left arm (check). Most common cause is axial traction i.e. a pull/yank on the child's hand or wrist; 2nd most common cause is a fall; some cases have been reported after rolling over (check).

Come the second morning, HN was still miserable and kept fussing and crying, although she's using her left hand and arm more. I insisted that we head to the pediatrician's again for a follow-up.

You know what? The moment she saw us changing clothes, she stopped crying. There was even a hint of a smile when I put her in her car seat. And she was beaming when we reached the clinic, the rascal! And sure enough, the pediatrician confirmed that the arm's alright after observations, but acknowledged that it's probably still tender, and that HN would make the most of the oppotunity to get extra hugs out of us. HN was given a generous patch on the elbow, and we were on our way.

By late afternoon, she was her usual mischievous and frolicsome self, rolling and dashing all around again. And that, reader, if you were reproaching me for the seemingly cold-blooded, calm tone of this post, is why I can write thusly 2 days after the fact. I was a miserable, emotional wreck on Friday night and Saturday morning, nearly driving MC up the wall too.

And once is quite enough, thank you, so HN, you'd better honour that promise about not playing so roughly again. EVER!
Posted by Unknown at 11:46 PM No comments:

话说回来，她那天也试着单手拿着一双筷子对着碗比划，但那始终太早了吧喂！
Posted by Unknown at 10:39 PM No comments:

始终不希望，不能接受小孩子好动、只希望小孩子如若古早时乖乖喝奶不乱跑的人们，言语不慎间伤害了宁儿（还有我）。绝对不要。
Posted by Unknown at 3:26 PM No comments:

For about a month or even more now, HN had been able to walk by herself but was very reluctant to let go of our hands or any supporting furniture.

Then finally on Deepavali Day (that's last Friday and I'm posting this on Tuesday), at MC's colleague's open house in Kulim, she was so taken up with a fluffy gorilla toy that she took it with both hands and walked around everywhere to show it off. Since then there's no stopping her — except when she's adamant that she wants us to walk with her.
Posted by Unknown at 10:50 AM No comments:

决定了！以后若太久没上来更新就用这个标题来灌水！>:D
Posted by Unknown at 3:22 PM No comments:

所以说啦，妈妈总是扮演坏人的角色⋯⋯
Posted by Unknown at 11:07 AM No comments:

结果，一颗心又七上八下了⋯⋯
Posted by Unknown at 11:21 AM No comments:

UPDATE: OK it's roseola! a.k.a. 假疹. Alarming as the fever can get pretty high, but apparently it's harmless and the only treatment is to let it run its course. She really had a hard time when the rashes erupted — was up the whole night and kept clinging to me. I couldn't put her down at all. We could only get some sleep around 4am. When dawn came we bundled to the hospital. Thank goodness she had some relief with Calamine...
But the poor thing's lost precious weight... A sick baby is a sad sight to behold.
Posted by Unknown at 8:23 AM No comments:

现在的小孩子哦⋯⋯
Posted by Unknown at 8:22 AM No comments:

Second tooth — and mayhaps a third!

We noted a second upper front tooth sprouting last night. And this morning the babysitter told me she suspected then a lower front tooth is coming out as well, but it's a bit further in and we'd have to feel for it.

只是啊，从此以后“大只虫”这个外号是更加摆脱不了了！
Posted by Unknown at 2:30 PM No comments:

After much grizzling, howling, mewling and frustrated gnawing — the first signs of a single hard, pearly white front upper tooth appeared this morning!
Posted by Unknown at 11:56 PM No comments: 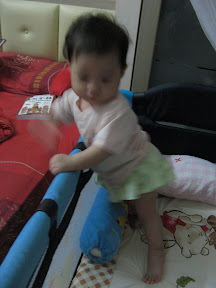 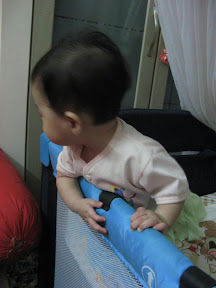 This means the the bassinet has to go then. Sure, sure... look smug about it all. 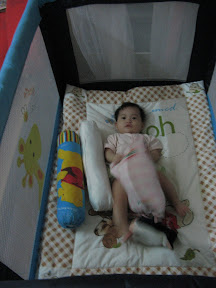 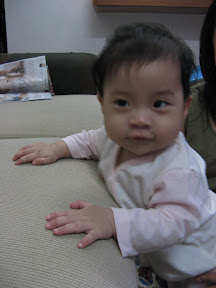 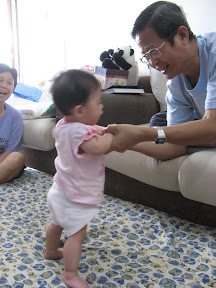 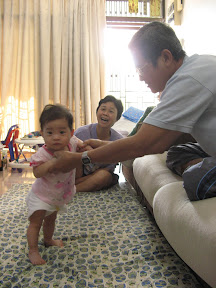 Posted by Unknown at 8:45 PM No comments: 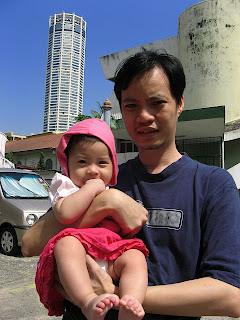 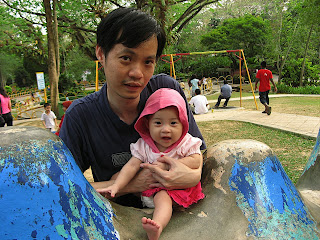 MC turned out to know more about Star Wars than I did. The moment he saw Hui Ning in this new dress, he made a beeline for the camel humps at the Penang Municipal Park.
Posted by Unknown at 10:37 AM No comments: