Hui Ning was begging for her meal yesterday morning. Begging so hard, she tried her old trick of rolling over onto her side, hoping a breast would somehow magically appear in front of her. No joy, so she tried harder — by seeking really hard with her little mouth ever more to a side, so hard she's almost burrowing her little face into the bed. (Erm... you're not going to find anything in the bed, darlin'.)

She was burrowing so hard that suddenly she rolled right over onto her tummy!
And she raised her surprised little head up high. And held it there for like 5 seconds. And somehow promptly rolled back onto her back again.
MC and I just stared at her dumbfounded, and burst out laughing. (Darlin', you're not supposed to do that yet for, like, another 2 or 3 months. You're just 2.5 months old...)
It took all of another 5 seconds for it all to sink in for Hui Ning. Then she burst into a brilliant, glorious, wiiiiiide smile. (Wheee!! New game!!) For most of the rest of the day, she tries again and again at repeating the feat, with only 1 further success. Needless to say she's excited and tired to bits by the evening.
Luckily (or not so luckily?) she forgot about her new game after a good night's sleep and didn't really try rolling over again. Otherwise we'd have to start re-arranging everything to keep her from rolling off her bouncer (them straps can't really keep her in, she has a way of wriggling her way out), the babysitter's big bed, etc....
Posted by Unknown at 3:44 PM No comments: 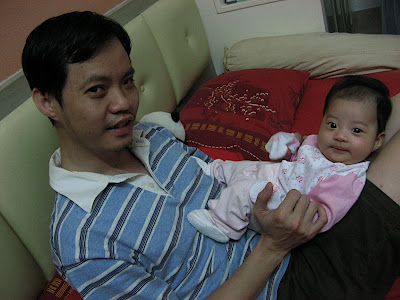 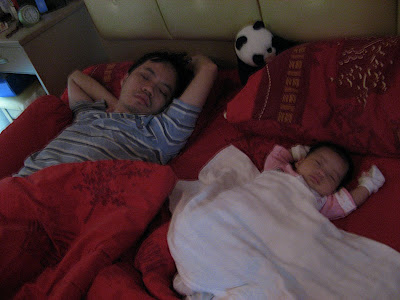 She is truly her daddy's daughter, from looks to sleeping in style.
Posted by Unknown at 2:02 PM No comments:

Hui Ning turned 2 months yesterday, and we took her to the doctor's for her immunisation shots. As usual, she's simply fascinated by the bright lights and insisted we walked around to show her all the stuff while waiting her turn.

The doctor and nurse were both impressed by her cuteness. And she herself even smiled at the doctor when he listened to her lungs and heart (all clear BTW).

And then came the shots... She howled, all right, but just for maybe half a minute. She let out a few more protesting yelps as the doctor moved away and the nurse and I calmed her down.

(me: Mommy's here, and Hui Ning's such a brave girl!
HN: I didn't like that, OK.
nurse: Yeah this doctor's always jabbin' people. So bad.)

But all was well as we were leaving and she even deigned to look the doctor in the eye as if nothing ever happened. Even the doctor was impressed. "Alright already?! So fast?!"

Back home, she seemed extra sleepy. Meal, and then sleep at 1pm straight away. It could be because she's had an exciting day out (she's always sleepy after visits to the doctor's, so many things to see!), or it could be the vaccine taking effect. We're just worried that she'd be feverish later.

She woke up howling loudly at 5pm, tears running everywhere. We thought it's the fever, but turned out that mucus was blocking her nose again. (She didn't really have a temperature either.) I quickly cleaned out her nose and she quickly calmed down, though with a few pitiable sniffles.  A meal of breast milk later and she's fast asleep again. Though I was really a tad concerned about the swollen redness at her injection site; until I read that it's common at babycentre.

3.5 hours later she's awake again — and my god can the girl smile!!! And all that leg-kicking! Albeit the left leg, which received the shot, is less vigorous, but still kicking nonetheless. I feel as if she's a tad warm to the touch, but MC said she's just fine. She was so happy and playful anyway!

Gooooood girl, Hui Ning!
Posted by Unknown at 11:47 AM No comments: